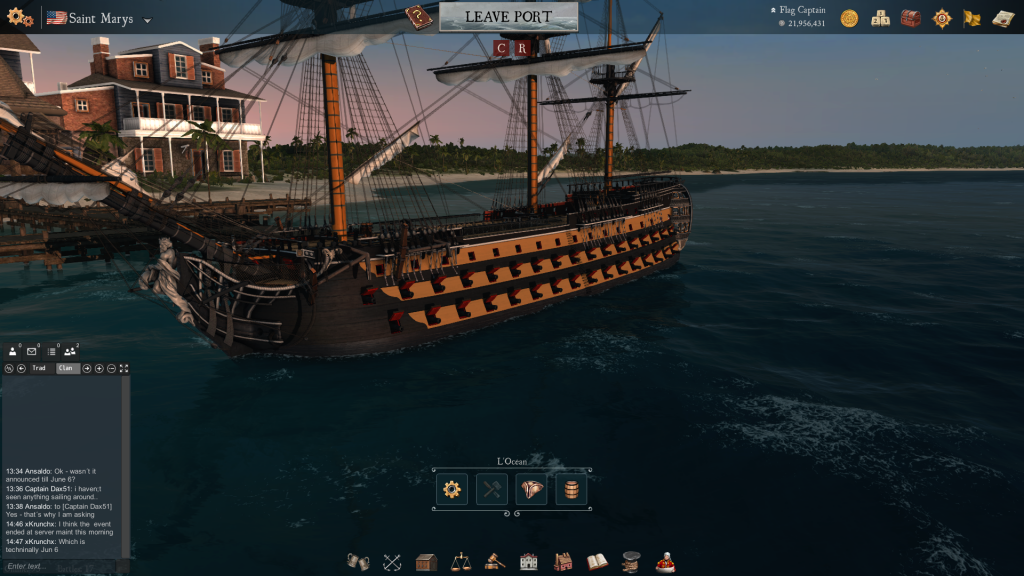 Naval Action is a multiplayer Naval warfare game set during the golden age of sail fighting for supremacy of the seas. This PC game features Naval Combat, Trading and an open world sandbox environment. I got this game a fair while ago because I love that time period in history, the age of sail. The game seemed like it could be fun. Standby for my Naval Action Review.

Naval Action is primarily focused on naval combat, trading, and crafting. It has an active player community that is very helpful.

What I liked about Naval Action

First, allow me to say what I liked. Here’s what I have to say that is positive about Naval Action:

I would also like to add that the player community is great. I found a clan quickly that was full of players who were willing to help me out, give advice, and play with me. They added me to their discord right away as well. That is beneficial for fighting together and coordinating for events.

Like so many games that open in beta, Naval Action had some problems when it first released.

The game was very buggy and had a lot of crashes. The good news is that the developers have been able to address these issues and the game is now much more stable.

However, the game still doesn’t feel quite complete to me. There is so much more that they could have done with it.

There’s also a bit of a learning curve with this game, so it does take some time to get to know how to sail with the wind and in combat. Boarding was pretty hard to master.

The biggest issue I have with it is that the game is a grind. You will be grinding for money, resources, and especially rank for a long time.

It’s understandable that you don’t start out as the Admiral of a massive fleet with HMS Victory as your flagship right away. However, I put over 300 hours into it over a couple of years and I still only made it to Flag Captain. I couldn’t fully crew a first rate ship at that rank, which made those ships rather pointless for me to use.

Much of the time spent on the game was just boring as well. Sailing from port to port. I am sure for some people that is enjoyable. Maybe even relaxing. However, it definitely takes a certain type of person to appreciate this game’s speed.

I am not one of those people. I get bored easily and need more action in my games. Naval Action just didn’t have enough for me to keep playing. I really wanted to love this game, but in the end, I just didn’t.

In short, it is a decent game with a lot of potential that is held back by some grindy aspects and lack of content. I hope you appreciate this Naval Action Review.